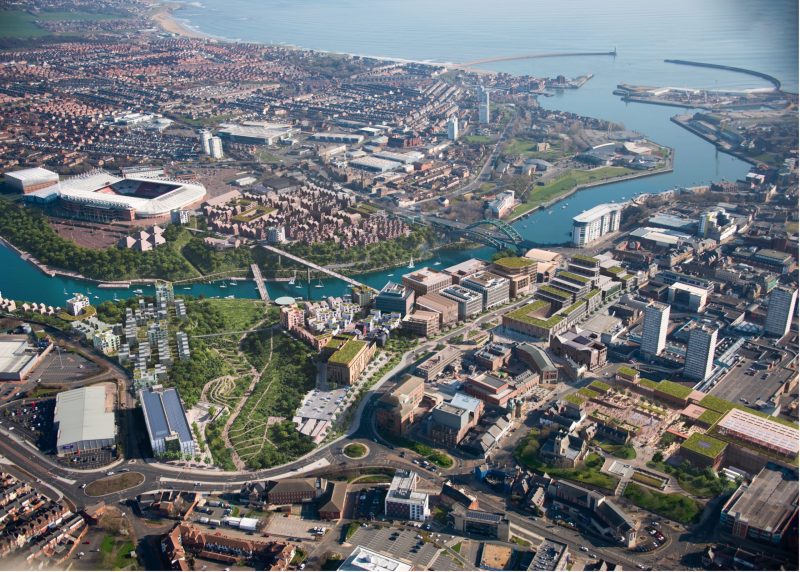 Already rapidly-changing, the stunning computerised visual of the heart of Sunderland city centre has been released by the city council, bringing to life dramatic changes already underway and depicting more to come.

The highly detailed digital projection, which has been created by North East architects FaulknerBrowns, captures a raft of new buildings, most of which are already under construction, as well as a number of future phase developments. It is a glimpse into the future of an exciting new urban quarter for the city, which is benefiting from more than £500m of live development projects that are underway right now.

Councillor Graeme Miller, leader of Sunderland City Council, said: “It’s clear to see the rate of transformation at Riverside Sunderland, and that is all part of a wider vision for the city centre which has been brought to life in these amazing CGIs, showcasing how spectacular it will look within the next ten years.

“We are confident and ambitious as a city and that’s why this picture isn’t just a ‘masterplan’, it’s a delivery plan. A picture of what we intend to deliver for Sunderland – a picture of what this city deserves.  It’s not just about how it looks, but about the way in which this vision will change the lives of people in Sunderland, giving new job opportunities as well as many exciting new places for them to enjoy.”

Included in the CGI are a number of developments that have been announced already, including Culture House, the new Eye Hospital, Crowtree’s new Arena, a new pedestrian crossing over the river and more housing that will line the Wear. Buildings already taking shape, like the Legal & General-backed Maker & Faber and the new Farringdon Row car park also feature in the ultra-realistic image.

Cllr Miller added: “We have announced so many plans recently that it’s easy to lose track just how much is planned or underway at Riverside Sunderland, but this really brings it all to life. It’s a fantastic reminder of what we are working towards and it makes me proud of the progress so far and excited about the future for Sunderland.”

Riverside Sunderland Masterplan sets out a development framework for the former Vaux Brewery site, High Street West, Keel Square, Galley’s Gill, Farringdon Row and Sheepfolds. The area will feature residential, commercial and leisure developments, aimed at doubling the residential population in the city centre and increasing employment by 50 per cent.

To find out more about the plans for Riverside Sunderland, visit https://www.riversidesunderland.com