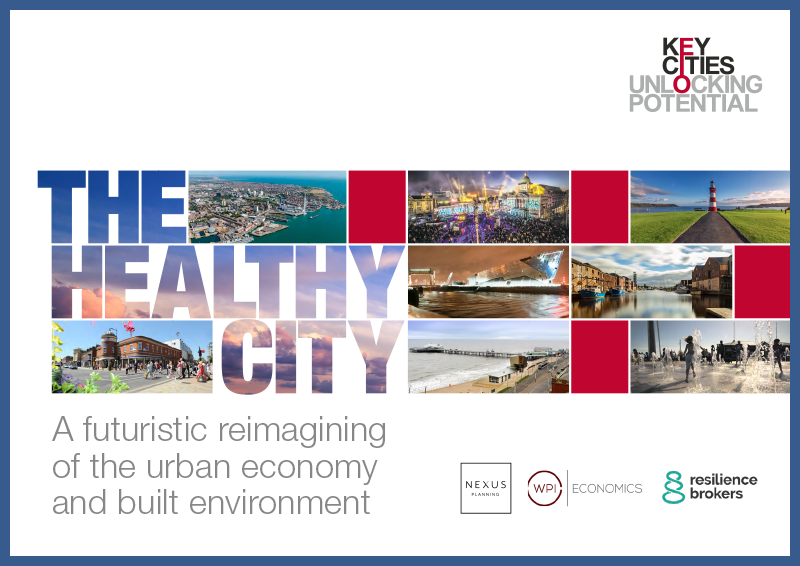 Key Cities Newsdesk
April 6, 2022
The UK’s planning system should be reformed to follow a ‘health first principle’, according to a new report published today by Key Cities, the national network representing 25 cities across the UK.

The report, The Healthy City, sets out a new vision for cities in 2050 to be based on the ‘health first principle’, which makes the case for cities to increase their support and promotion of mental, physical and social health through a number of policies and reform at both the local and national level.

The vision has been created to address the major challenges our cities are currently facing, and which, if left unaddressed, pose significant threats to the health and wellbeing of people and planet.

The Healthy City Vision: The city of the future is transformed. It has a new purpose, and for the first time, it is firmly based around the needs of people, while also proactively and dynamically preserving our planet. People are no longer second to infrastructure, buildings or land use, and a more ‘regenerative’ standpoint is now taken, acknowledging that the city’s key role is also to foster healthier mindsets and behaviours.

The report suggests a new approach to town and country planning is required to realise this vision: one that moves away from having the delivery of housing numbers at its core, and replaces it with a holistic vision of health.  Delivering affordable, quality housing remains a critical issue as part of an array of conditions necessary to support good health.

The ‘health first principle’ requires the creation of a National Vision and Planning Strategy and Place Frameworks where city authorities would embed everything known about health into plans, decision making and governance.

Health inequity is one of the biggest challenges cities face. The Marmot Review (2010), and subsequent work by other experts, highlights the growing evidence that the conditions in which people are born, grow, live, work and age and the inequities in power, money and resources that influence these conditions, significantly impact their health:

The Healthy City states that the interlinked challenges of health, climate change, economic and technological change, inequity and social justice can all be tackled by adopting the ‘health first principle’. This, supported by a new framework of city transformation, could make the built environment attractive, accessible, adaptive and for all.

To achieve this, key recommendations include:

The Healthy City was commissioned by Key Cities with research undertaken by Nexus Planning, Resilience Brokers and WPI Economics.

“As the engine rooms for the UK’s post-pandemic recovery, the members of Key Cities – a network of 25 medium and small sized cities spread across England and Wales – are ideally placed to lead the transformation set out in our report. They are compact enough to be agile, but large enough to be able to make a difference.

“It is a fundamental truth that our future health is reliant on the health of others and the health of our local and wider natural world and its ecosystems. By bringing an inspiring vision of the future of to the table, we can level up our cities with health at the fore. Ultimately, a healthier population will inspire innovation, bring communities closer and deliver better economic outcomes.

“Cities are the economic engines of the nation. But their continued growth and prosperity depends upon our urban areas evolving to overcome the numerous challenges that they face. The mental, physical and social health of city residents should be at the heart of this evolution. Making cities more fun, more active, cleaner, less stressful and less lonely will mean a more innovative and productive population in every sector of the economy and in every community. National and local policymakers need to work together to turn the vision for the Healthy City into reality.”

“The Healthy City, a future reimagining of the urban economy and built environment sets out a compelling vision for how UK cities and regions might be shaped in the coming decades. The report’s aim is to stimulate discussion with all those who have a stake in the future. There are clear connections here to the localism, levelling-up, and devolution agenda’s, and local action is imperative for our health and care, jobs and regional economies and our resilience to climate change. Cities and communities across the UK are rising to their challenges, but the practical actions in this report show collectively, there is more we can do.”

“This vision is so important as it acknowledges the importance of cities, the critical impact that they have in shaping us and in turn how we impact on the planet.  However, to deliver on this compelling vision for our future cities, we need a new vision for planning.  One that reinstates health as a key purpose.  This will require bold and visionary leadership, this though is not new and unchartered territory, but a return to the origins of the planning system which has always been there in spirit.  The alternative is to continue to ‘plan’ in a largely fragmented and piecemeal way and accept the consequences, this is something we should seek to avoid at all costs.”