Cities propose renewal of urban centres to level up UK 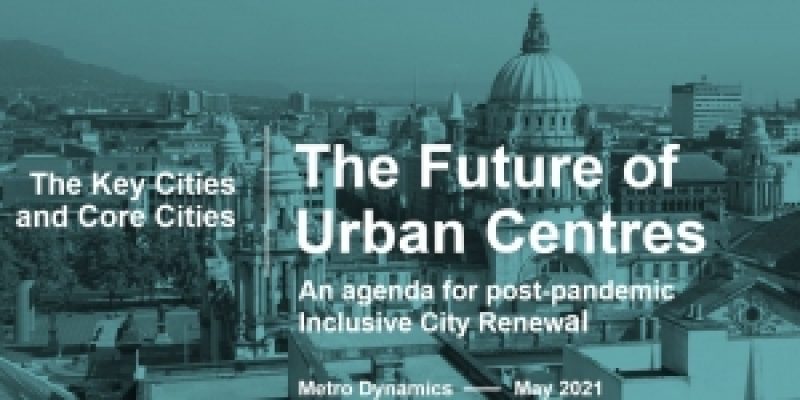 Key Cities Newsdesk
May 21, 2021
Core Cities UK and Key Cities join forces to call for new powers that could grow economy by £89bn and pull 3.3m people out of poverty – based on research revealing the staggering impact of ‘Zoomshock’ on the UK’s urban centres, which lost a net 273,000 workers to suburban areas during the pandemic.

Key Cities and Core Cities UK – two networks representing 36 urban centres accounting for nearly a third of the UK’s people and jobs – have today published a new ‘inclusive renewal deal’ to level up the country and help cities recover from ‘Zoomshock’.

The framework has been outlined in a new report, The Future of Urban Centres, commissioned from independent consultancy Metro Dynamics, which reveals the staggering impact of Covid-19 on the UK’s urban centres and calls for new powers to boost post-pandemic economic recovery.

Following the Government’s recent announcement that Neil O’Brien MP has been appointed as chief adviser on levelling up to add clarity and substance to the policy, this research highlights the need for urgent action to address the challenge of the UK’s widening inequalities.

The inclusive renewal deal calls for greater collaboration between cities and Government in order to tackle the urgent crises of job losses, economic inequality and climate emergency.

The report and recommendations are based on independent research undertaken by Metro Dynamics, which highlights how cities have been disproportionately affected by the Covid-19 crisis.

Due to the effects of ‘Zoomshock’, urban centres have been hollowed out as people shifted to homeworking in more suburban areas en masse. In the past year, Key Cities and Core Cities UK combined have seen a combined net loss of 273,000 workers, creating significant implications for businesses located in these areas and exacerbating existing inequalities across neighbourhoods.

However, cities are resilient and there is a significant opportunity for them to drive an inclusive post-pandemic economic recovery.

Considering both these challenges and opportunities, and the fact that city and town recovery is strongly connected, the report sets out how urban areas can drive -levelling up through the inclusive renewal deal.

This would see cities tackle the urgent crises of job losses, economic inequality and climate emergency; facilitate a new model for hybrid office working; consolidate an improved retail offer; double down on their cultural and creative strengths and pivot towards future sources of inclusive growth driven by innovation.

Key Cities and Core Cities UK argue that this can only be achieved through partnership at the city level with local people, local businesses, anchor institutions and investors, and at national level between the Government and city leadership.

The alternative would result in long term scarring that could drag cities back decades, with an increase in unemployment, worsening health and economic inequalities and a revenue crisis, heightened by a loss of business rates and commercial revenue, combined with escalating need and service demand.

“If Covid 19 has taught us anything, it is that going back to the way things were is not an option. Only new, locally-led, solutions will work in a world changed forever by the pandemic. That is why we believe it is time for radical new thinking about the role of our cities and to argue for Government to implement policies that can unlock their massive power and potential. This report is an important step on that journey.”

“If we want cities to drive recovery, we must listen directly to those who run and represent those places, who are closest to the lived experiences of residents and aware of the obstacles and opportunities for progress. The inclusive renewal deal in our report sets out in practical terms how, by working together, we can find solutions to systemic problems like unemployment, poor health and inequality and change society for the better.”