Party conference round up 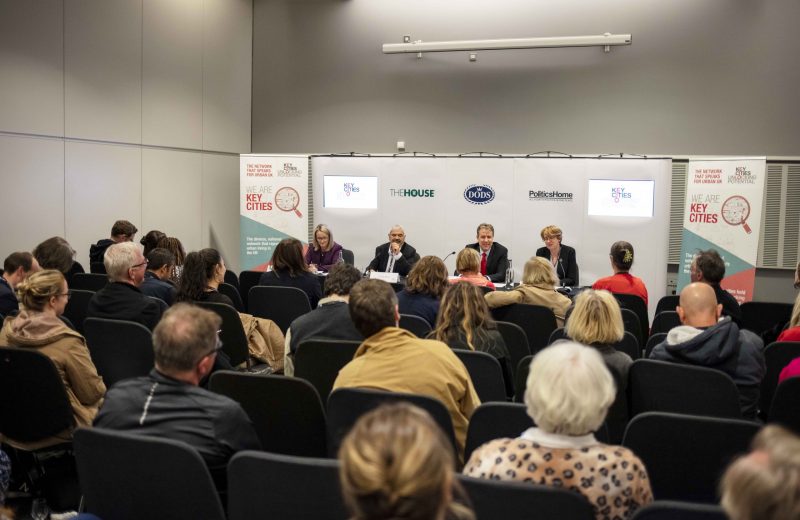 Key Cities Newsdesk
October 10, 2022
Against a backdrop of political and economic turmoil, Key Cities hosted events at the recent Labour and Conservative party conferences to showcase the huge potential of our urban centres to meet societal challenges.

Our ‘Creating Healthy Cities’ event delved into the findings of our recent research report, with speakers discussing how our cities could be completely revolutionised by prioritising health within local and national policy.

Dan Norris, Mayor of the West of England, stressed the importance of good housing to health – people need to have access to quality, affordable homes with good air quality, light and outdoor space to live well. He also made the case for more council housing, which was echoed by Rebecca Long Bailey, MP for Salford and Eccles. She referenced Dérive, Salford’s own development company, which was set up five years ago to increase housing delivery. Other local authorities could be adopting similar models to build more homes and create healthier cities across the country.

There was widespread agreement that both homes and neighbourhoods need to be planned, designed and built with mental and physical health in mind. This is also essential in combatting loneliness – we need to create places that encourage conviviality within communities.

Finally, there was a call from Cllr Susan Hinchliffe, Leader of Bradford City Council, for more local powers to enable cities to implement changes that will improve the health outcomes for their own populations. There is no one size fits all approach.

A week later, our ‘Whitehall Withdrawal’ event with Core Cities explored how devolution can support levelling up. There was huge cross-party consensus across the panel, with everyone calling on Government to give local leaders more autonomy, funding and trust to imbalance inequalities across the country.

When asked if local authorities have the capacity and resources to manage more devolved powers, Cllr Drew Mellor, Leader of BCP Council, pointed to the incredible achievements of councils over the past two years: if they can deal with a pandemic, they can certainly deal with devolution.

There was also much discussion of the recently announced Investment Zones. Whilst they were broadly welcomed, Andy Street, Mayor of the West Midlands Combined Authority, highlighted that the critical issue in ensuring their success is duration: they need to be in place for long enough to have an impact, not shelved in a year’s time when the next initiative comes along. Cllr Brigid Jones, Deputy Leader at Birmingham City Council, also pointed out that surrounding infrastructure and public realm needs to be considered for these places to truly level up – it’s not simply a case of creating places for people to live and work.

Over an eventful two weeks, it was great to be a part of stimulating and insightful discussions about the role our cities can play in supporting local businesses and communities, and in turn, the UK economy and society. We look forward to continuing the conversation with both parties in the coming months.